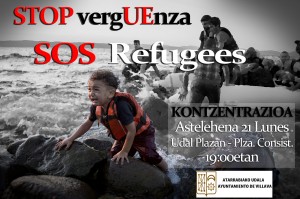 A terrified child clings to a rock on the shore as a group of Syrian refugees arrive on the island after travelling by inflatable raft from Turkey. The Eastern Mediterranean route from Turkey to Greece has overtaken the central Mediterranean route, from North Africa to Italy, as the primary one for arrivals by sea. From January to June this year, 68,000 people arrived in Greece, compared with 67,500 in Italy, accounting for nearly all the arrivals in the period.